Quest for Valor is the biggest Unreal assignment that VFS students has to do during the year: it involves two courses, Level and Mission Design, for about two months.

It is an individual assignment where we had the opportunity to follow the same methodology that is used in the industry, following a step-by-step process from the level on paper to the final, polished one in engine.

We were not required to design new features, but I wanted to focus more on learning Unreal, that’s why I decided to add something to the core experience. This forced me to improve my understanding of how Unreal works, which was quite helpful during my final project.

Quest for Valor is surely the assignment on what I worked longer during the year, I really liked the idea of bringing to life my level design ideas.

The image on the right is the original design that I made for the dungeon: during this post-portem I will always show the original documents and videos, so I will be able to point every mistake and design solutions out .

Once the level was designed on paper, I moved on the whitebox phase, where I created the level using BSPs, trying to individuate potential problems and to have a feeling about the level. During this phase play testers were able to walk through the whole level, even if gameplay beats were not in.

During the second phase I was working on the gameplay, adding combat, platforming and puzzle challenges. The last phase was mostly dedicated to do the set dressing and to polish the gameplay.

Along the whole level, various cinematic empathize what happens, showing to the player important gameplay elements. The whole dungeon in very dark, even if a light always follow the player: that’s why I decided to guide the player placing torches and particles near every important spot. Music and SFXs provide feedback but not only, because I wanted to create an immersive atmosphere, matching sounds with what happens on screen.

At the same time I also started to work on the outside world, a different a map most focused on narrative and environmental diversity. I designed the other map following the same principles and steps: this second map is where the player starts to play, this is why I decided to focus on setting the mood up before starting to challenge the player.

The last three pictures on the right show the design of the Outside world and which was the creative process. I started out defining the pace and timing what I wanted for this section; as you can see I originally planned to have way more combat beats. I had to cut some of them, before of scope issues and because I wanted to take my time on setting the mood, instead of throwing the player into a very long sequence of fights.

During the design phase, I decided to focus on some level design factors, such as Mass & Void, Elevation, Scale, Pacing and Memorability.

Focusing on mass & void was very important on this map: a very dark environment like a cave needs to guide the player towards his final goal. He has to understand where he can move without learning by failing, otherwise he will start to feel lost and unsure about the path to follow.

I used elevation in different ways depending on the section of the map. At first, the player ascends always, I wanted them to feel like going towards an important place: we can find examples of this concept everywhere, taking as example the LOTR, our heroes many times try to reach a place located on higher ground. Important spots are not on level ground, they would be too accessible there; only few, brave adventurers deserve to be there. I also created a big cliff: I wanted that spot to look inaccessible, I wanted the player to recognize it as a different place, a place where he can access only doing something different. Inaccessible places give always interesting rewards when you find out how to get there. This was the only optional path that I created and I wanted to give a special reward to whoever decided to explore it: not only a special power that allowed him to swim inside of lave without harm, but also a new narrative beat and the most interesting and diverse environment in the whole dungeon. At the end, when the player is about to met the King Skeleton, the elevation starts to decrease: when we think about danger, we always think about underground places, like the hell.

Speaking about Scale, I wanted the player to feel overwhelmed during the whole journey: Juno is a pretty small character but she looks belligerents, that’s why the caves are way bigger than her, in some cases she can’t even see the ceiling because it is too far. The message that I wanted to deliver was “not even heroes are safe here“.

Pacing was a very challenging factor to work on, because Quest for Valor is a very short game, just about 20 minutes. It wasn’t easy regulate intensity beats in a such short amount of time. I decided to divide the whole world in different areas and lock the player in using very evident elements, like a door closing behind him. I wanted him to understand where was the line between a safe and an unsafe area. Depending on the situation, I wanted him free to enjoy the exploration or ready to face a fight. 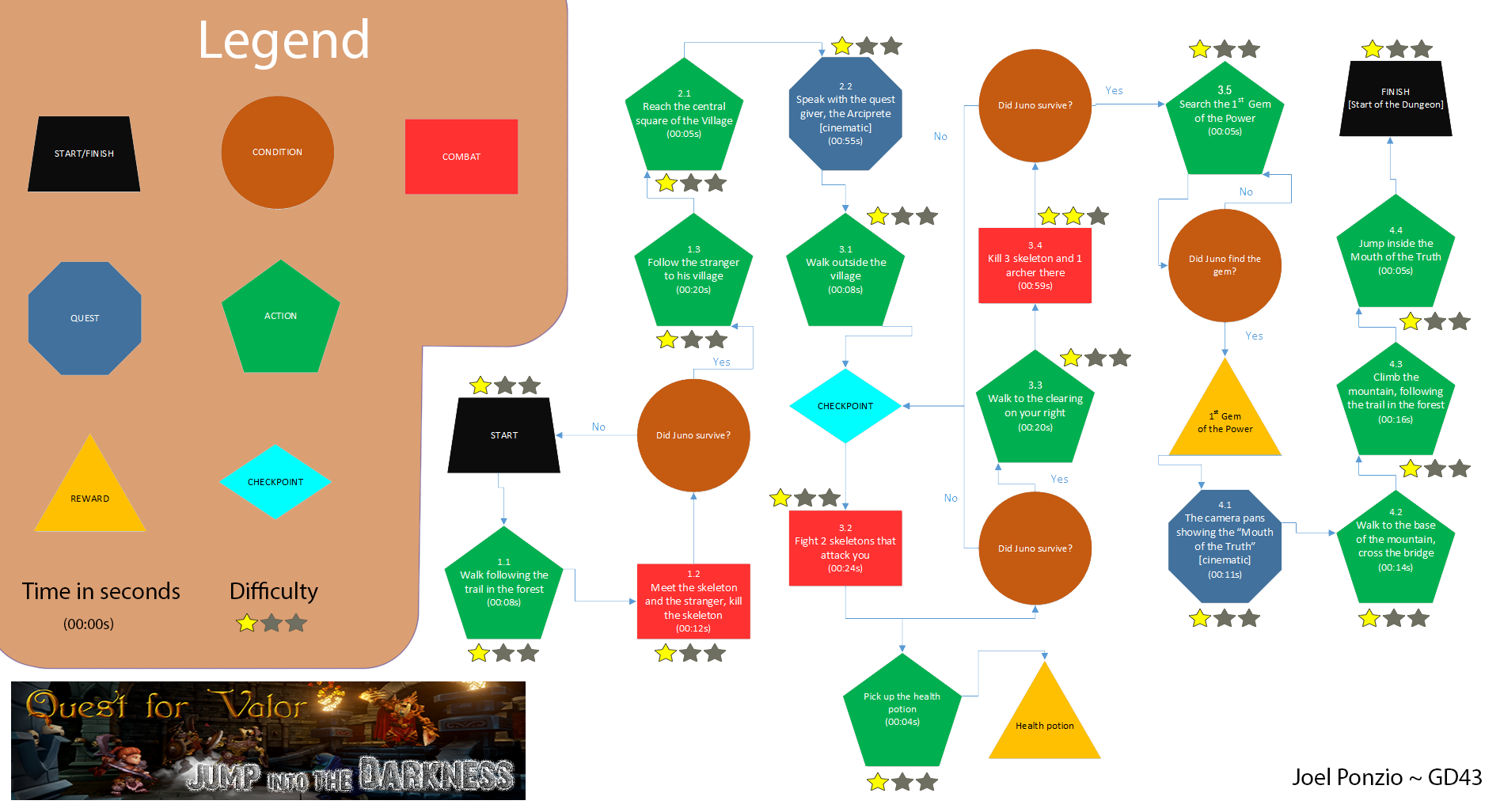 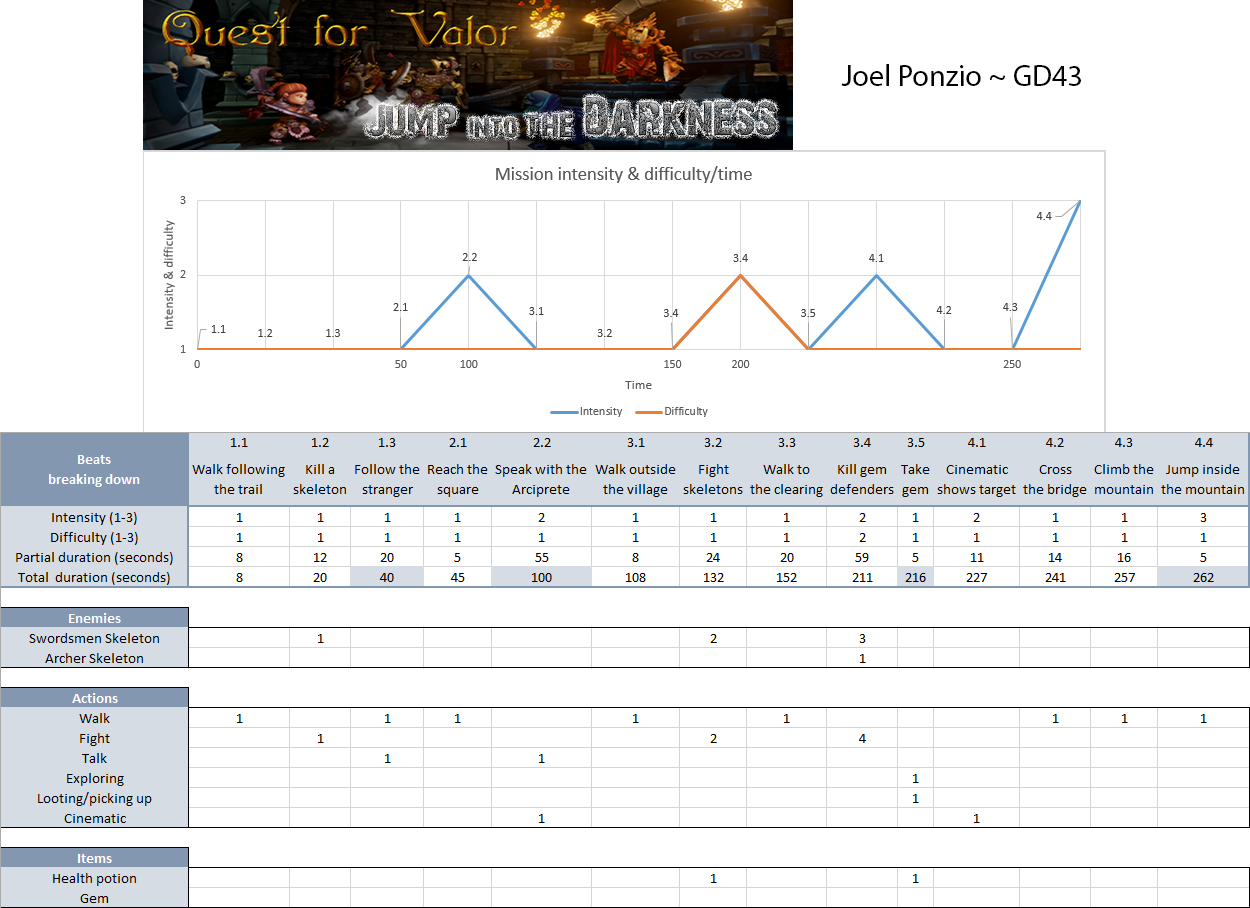 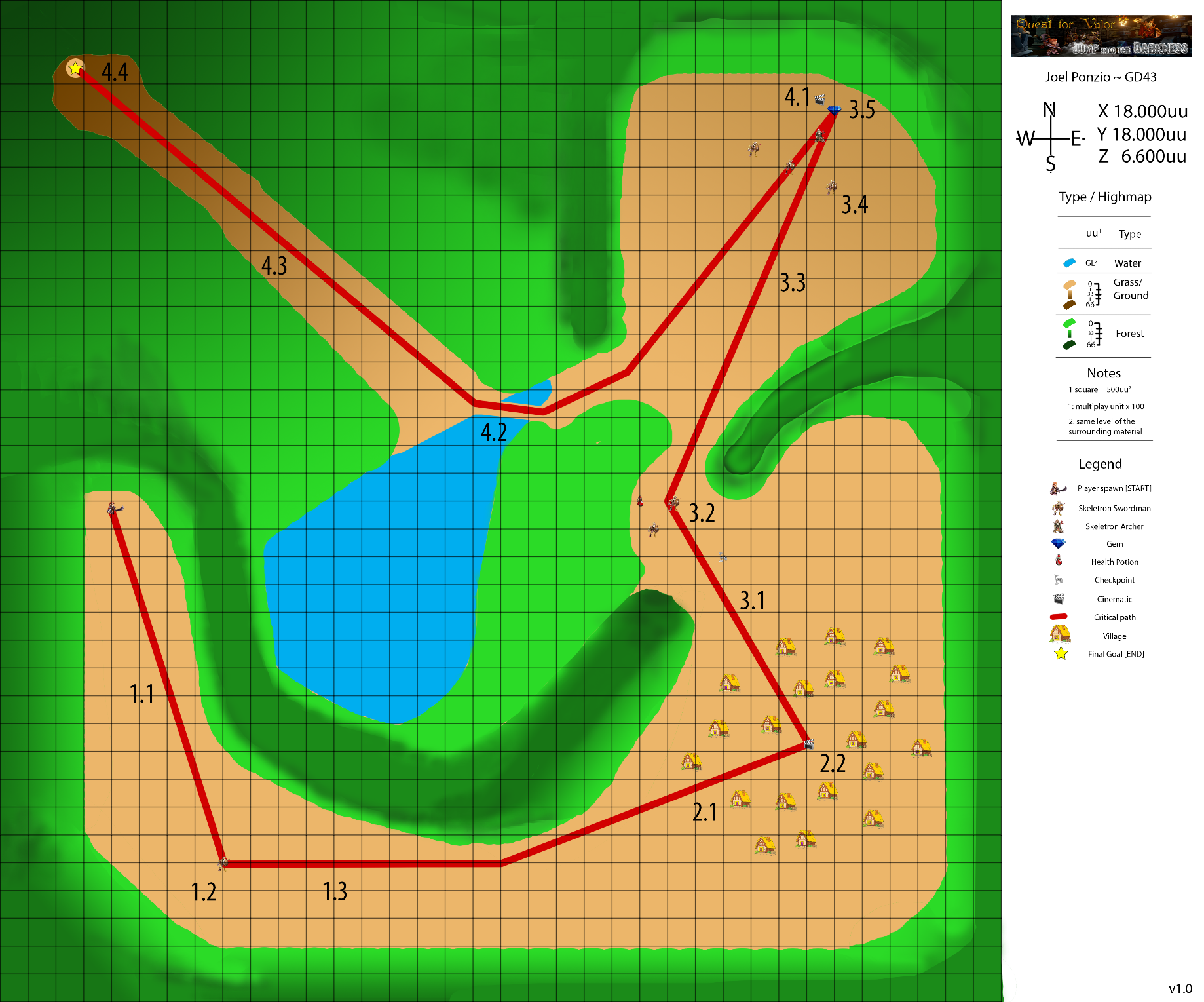 I made just a few changes to the core of the game, which was created by our former Level Designer instructor, Scott Morin.

I wanted to have an underwater cave, a visually interesting place where to hide the first gem and the key that opens the first gate, but Juno didn’t have any swimming ability. So I made it for her: this was the first opportunity that I had to play a bit more in depth with water volumes in Unreal. She just walks inside of the water because the character has not swimming animations, but the player can move her inside of the volume, experiencing some physics effects like buoyancy or friction.

I also wanted to tie the narrative with the gameplay: I decided to give a horror twist to Quest for Valor, this meant giving Juno some powers and playing a lot with the lights, in order to deliver a different feeling. I also changed the UI with a more fitting one: this was a good learning experience that taught me the basics of the UMG system.

– the first one activates a small fairy that constantly follow her, providing light.

– the second one give her the ability to swim inside of the lava without dying.

– the third one turn her blue fairy into a red one; this is actually a saddle feedback that shows the curse that now Juno has on her.

– the last one completes the evil spell, turning Juno to a copy of the King Skeleton.

When she walks out from the graveyard, she looks like her enemy: even his army is deceived. When Aaron finally gets to the cave and attacks her, sure that she is his enemy, she decides to give her life instead of killing innocent people.